The courage to let go (Book Review: JD Salinger's The Catcher in the Rye) 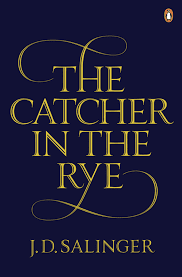 Just finished reading JD Salinger's The Catcher in the Rye, and I am penning down the impressions of the book. It is not exactly a review.

The only thing I knew about The Catcher in the Rye was that it's a famous book, written by a reclusive author. Read an article in a newspaper about it. This book has been on my 'books to read' list for a very long time. It's even been on my bookshelf for a couple of years now.

I found it difficult to get started - the first few pages took quite a while. It may have had something to do with the small font of the edition I have. Of course, once the story took off, the font ceased to matter that much - although it does affect the speed of reading.

The Catcher in the Rye reads like a journal. It uses the informal, spoken language, instead of the 'right' correct one that would be expected. I guess it is part of the charm of the book.

This book was written years before my mother was born, in a country foreign to me. Many words didn't make sense - it was the context that explained them to me. But I think that has more to do with the time, than the place. But the thoughts and feelings seem to belong to this day.

I had a smile on my face at the very beginning, where the protagonist refused to write about his childhood, etc. But with 'innocent' words, here and there, conveyed quite a lot.

My son has recently joined a boarding school. I think this made me relate more to many things. Though I can't imagine a sixteen-year-old doing all that, without his parents' knowledge at all - am I living in the wrong century?

As the story proceeds, I want to see Holden doing well in his life - the very first page conveys, he probably has not. All his elders are telling him in different ways to do things 'right'. He is at crossroads through this book.

Is there a hidden meaning, when Holden keeps wondering and asking where the ducks of the central park go in the winters.

Who has not hated school? Is it practicality that keeps us going? Or are we just too scared to do something different? Through life, we keep trying to fit into the set molds. Holden doesn't.

Is it cynicism? Or is he actually smarter than the rest?

I see people around me making conversation, laughing as if having fun when in fact they couldn't care less. But that's how we live and interact and keep going.

Holden calls the 'phonies'. Still, he keeps feeling sorry or sad for stupid, 'phony' and even selfish people. He sees their shortcomings but doesn't hate them. Instead, he's always asking to himself, "I am a madman". Is he in an asylum or rehab of some sort now, when he writes this account?

Not just people, movies and books and plays are phonies too. I can just imagine Holden thinking every single movie I like is a phony.

Then there is Jane Gallagher. The one character in the book, who seems to matter the most to Holden, besides his siblings. And somehow he's never able to talk to her.

Through the book, I was continuously psycho-analyzing what makes Holden the way he is. The brother who's no more? Holden's siblings are obviously smart. And so is Holden. What is making him discontent, is something insides him. Did the death of a younger sibling do that to him?

But are the answers to complicated human nature ever so simple?

The Catcher in the Rye is a cult and I can understand why.
I didn't relate to it all that much but then given the subject I couldn't have.
There are many things I didn't understand.
Maybe one day I will read it again, and understand where the ducks of the central park go in the winters.

August 05, 2020
Title: Ready for the World - Superstar Author: Charmeljun Gallardo Genre: Young Adult/Coming of Age Book Review The second installment in Gallardo's Ready for the World series starts with the protagonist, Brandon working on his book. The series is set in 1980s when the typewriters ruled and cellphones and social media had not taken over the lives of youngsters. Superstar takes off where the first book, Driver's Education had ended. Brandon has realised that being a writer is his calling and being with his childhood friend, Ally his destiny. Life seems to be sorted. But then when are things in life ever so simple? Well, they are not simple in this case either.  Through the course of this book, we see Brandon struggling with his feelings, discovering things about himself as he goes along,  hanging out with friends,  living through high school, taking a job and finding new interests, struggling with difficult choices and heartbreak... basically living the life of a teenager.
Post a Comment
Read more