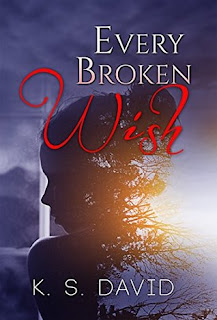 Title: Every Broken Wish
Author: K.S. David
Publisher: Createspace
Pages: 173
Genre: Romantic Suspense
Litha Adams is a rich and powerful entrepreneur. She is a warm person, but she has her secrets. No one knows about her past.

"Marriage and love were secondary to business news and economic reports. Vacation consisted of 7:00 a.m. calls to staff. She could only relax when she had a stack of 10k’s under her arms. At thirty-eight, Litha was single, childless and it looked like the only family she’d ever have was the collection of companies held in her portfolio."

Now Ethan Garner has returned to her life, years after she had left him, seeking answers. As there is a break-in at her house, they find out that it is Litha's life that is at stake.

As the story moves on, Litha has to figure out whom she can trust.

Every Broken Wish builds up the suspense well so that the pages keep turning quickly, as you find yourself absorbed in the world of Litha Adams.

K.S. David's Every Broken Wish is a grabs your interest from the very first word. The secret and the chemistry between Litha and Ethan makes for a very interesting read. The small details in the writing make the words visually striking.

In a voice that had turned cool and hard, Litha said, “Shaun, put the phone away. Let him through.”

*  *  *
on October 14, 2017
Email ThisBlogThis!Share to TwitterShare to FacebookShare to Pinterest
Labels: Book Review