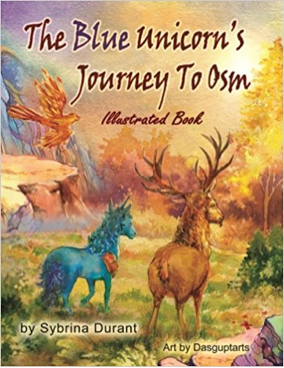 My Review
In The Blue Unicorn's Journey to Osm, author Sybrina Durant has created the fantasy world of the Land of MarBryn, complete with a map at the beginning of the book which guides us through the many adventures in the story, a tale of many creatures, fight between good and evil, and miracles.

In the Land of MarBryn, the tribe of metal-horned unicorns is in danger from Magh, an evil sorcerer. He uses the horns and hooves of the Unicorns in his magic potions and spells.
The story begins with the birth of Blue. It had been foretold before his birth that he would be the savior of the tribe.
He is a disappointment when he is born because his horn are covered in a plain blue hide instead of metal.
It is the metal on the horn and hooves that are source of magic of the Unicorns. Each of them have different metals and different magical qualities.
Blue has no metal and no magic.

"... it seemed unfair for the pitiful little runt to have to carry such a burden from birth."

From the very beginning, your heart aches for this newborn, struggling to fit into a world where not only is he different, but worse still, because of the prophecy he was supposed to save the whole tribe.
This makes him a big disappointment, and a target for cruel sarcastic comments too - "our great unicorn savior".

Twenty years later, Blue is still the unmagical being, a loner now (except for one very good friend), and everyone seems to have given up on his being the great savior.

As Blue transforms to Osm, there is a major change in him. As the unicorn doctor says: "Osm is awesome."

The Blue Unicorn's Journey to Osm is a tale of adventure and fantasy, that demands that you get lost in it.
From Unicorns and firebirds, to talking ice-cubes and two-leggers, and many more, this world gives us a story with many layers.

The fight of Blue/Osm is against an evil of the worst kind, one who takes pleasure in hurting others - "You see, the sound of pain gives me intense pleasure. It's like music to my ears. It makes me want to dance."

One can guess the path the story is going to take from the beginning itself. It is details, the emotions, the multi-layered vibrant world that captures while reading it.

The illustrations help visualize the variety of creatures, giving them colorful and distinct human-like look.

If you like adventurous fantasies, this illustrated story is a perfect place to visit.