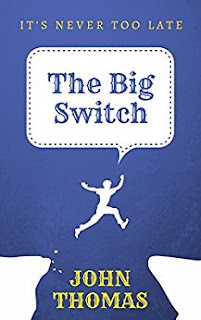 Title: The Big Switch - It's Never Too Late
Author: John Thomas
Genre: Fiction (Motivational / Self-help)
The protagonist of John Thomas' The Big Switch is Keith,
If an outsider would look at his life, he would certainly give the impression of someone who had everything going for him.
He is a software engineer after all, with a good job, a girlfriend. He seems to be on the right path. Seems to be...
Keith is a pushover. He does what is expected of him.
He wants to please everyone. An impossible task, obviously, which leads to his undoing. A good thing ultimately.
Keith chooses to listen to the uneasiness within him and goes through a difficult period of disquiet.
"The thought of continuing with the mediocre life he had lived so far choked him. He was just an average guy, living just another average life. He felt like a nobody."
The Big Switch is about the path to self-discovery of the protagonist.
It is like a story told to put across a message; a well-told story yes, but for me, it is a self-help book in the garb of fiction is obvious.
The story of Keith is one of a series of events that test his confidence, his choices in life. It is about following one's heart, working hard, and trusting fate finally.
"When you don't get what you want, you get something which is far more precious."
You do get a lot of details about Keith's job as a software engineer, and the other things he chooses to venture into. I don't want to mention the details as that would give away too many spoilers.
The Big Switch-It's never too late gets a little preachy at times, but it does get the message of positivity, 'nothing is impossible' and 'believing in self' across.
"Set a goal so big that it scares you. Decide on something that won't let you sleep at night."
Ok... if you say so. I know what is being conveyed but the words had me thinking... nope, losing sleep is not good. I understand what is meant when you take the words in the right context rather than taking them at face value. That is how the book can work for you.
So, I have to confess that I was not convinced by some of the paths the plot of this story took.
"Not possible", I thought.
What I also did think was that one has to believe in the impossible, try one's hardest, and life itself takes a beautiful course.
Call it karma, destiny, luck, or whatever.
That is what the final message of this book is and the author gets across the message through the life of Keth.
In today's difficult times of competition, work pressures, burnout at rather early age, emotional turmoils, this book is about having ones' priorities right.
"When you love your job, you don't count the hours. You just enjoy every single minute."
The plot of The Big Switch is not very realistic. The writing style is descriptive about Keith's thought process and his vocations.
This book is for you if you are looking for a positive push in your life, and if you are struggling with choices.
*  *  *