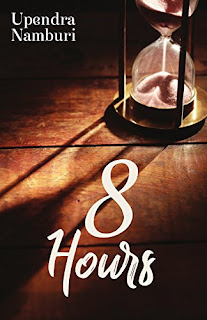 Title: 8 Hours
Author: Upendra Namburi
Genre: Fiction (Corporate Thriller)
Published by: Westland Ltd.
No. of Pages: 282
Cover Price: Rs. 350
Disclaimer:
1. I don't understand much about multi-million dollar deals. What little I do know is from movies and books... and news, especially when a bank I have an account in, is part of an 11,000 crore fraud.
2. The huge figures of hundreds of crores, and millions, and billions are just that to me... huge figures. I find it impossible to even imagine what it's like to deal with that kind of money.
It is important to mention these points beforehand because I realize that anyone who is knowledgeable about these things may find more to like (and, maybe, criticize) in this time-bound thriller of Upendra Namburi.
8 Hours is third in a series of Number novels by Upendra Namburi and the second that I have read.
Aratrika, the protagonist of 8 Hours is described as a 'Corporate Czarina' in the book. She is the Managing Director of ARYA, the company that is on the verge of possible collapse. Important decisions are to be taken in the 8 hours documented in the pages of this novel.
Aratrika has inherited the business from her father, Madhusudhan Reddy and worked hard on fitting into and expanding the male-dominated, unorganized business.
She has an impress-hate relationship with her father. Much as she hates him for being the insensitive, abusive person that he is, she always has a need to impress him.
The Reddy family is a dysfunctional one, the craziness of which just keeps coming up with new surprises.
In the 8 hours of the night, the story moves back and forth from past to present, giving us glimpses into what has lead to the present.
8 Hours is packed with raw emotions. Too many of them, I felt at times.
The different characters of this book have distinct idiosyncrasies. The author has given an emotional touch to the practical business deal, because of which it is difficult to predict what path the deal and the lives of those involved will take.
As a character in the book says, "Life would have been much simpler if it had been just about the money". Had the decision been about only money, the choices in 8 Hours would certainly have been much simpler and much less interesting.
There is some violence in 8 Hours and it made me cringe. If it is supposed to convey the 'anything goes' attitude of the corporate world, the animal attraction, the conscience-less world, it certainly did manage to do so.
I do feel that Aratrika's character could have been portrayed better. You get introduced to many aspects of her life. Her past and present, her pain and her ruthlessness. But something was missing. I felt I still didn't understand her.
The fast-paced plot of 8 Hours is full of quick, short conversations, and abrupt phone disconnections.
One of the problems that I faced was with the many conversations, where I lost track of who is saying what. The quick repartees had me going back to the beginning. If this person said this line, the other one the next one. And counting to the 7th or 8th one, finally figuring out who said what.
8 Hours reads like a Bollywood movie - a mixture of many paradoxes.
Anything is possible.
8 hours of people changing sides, and quick conversations having huge impact, is rather mind-boggling.
At times, it felt like things in 8 hours just happen, and because there is tons of money, unimaginable power, and craziness involved, it is justification enough.
I watched the movie Fargo recently. Towards the end, the police chief Marge Gunderson asks, "...for what? For a little bit of money. There's more to life than a little money, you know... I just don't understand it."
That is the thought process I can relate to. So 8 Hours for me is a peep into a world which I realize exists, but I cannot be too affected because I am asking 'why' half of the time. Why do it at all? But it is like quicksand, I realize. Shouldn't have taken the first step but you didn't know.
I understand emotions. Money, that too of the kind of amounts here are beyond my comprehension. It is the emotions that kept me hooked to the book. Emotions and the fact that 8 Hours is fast-paced, easy to read.