The lingering pain (Book Review: Vikram Kapur's The Assassinations - A Novel of 1984) 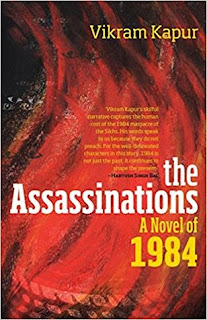 As the author introduces us to the serene Delhi of 1984, there are many small details that, being a Delhiite, I can relate to. The Defence Colony bunglows, the hangouts at Chanakya Cinema and Nirula's (there were not very many places to go to back then), the University Special, and more.

Vikram Kapur's poignant novel begins in the year 1984 at a time before the four digits evoked painful memories and strong emotions.
And the biggest problem is a rather routine one - inter-religion love marriage.
Operation Bluestar changed things.

The author comments "Most Hindus believed it was warranted; most Sikhs disagreed"... I realize that it holds as true today as it did in 1984.
And because the plot of the book has us getting the viewpoint of both a Sikh family and a Hindu family closely, the thoughts of both find a place in this book.

There is a parallel drawn between Partition, and the situation in Punjab in 1984 and what followed after that.
Now that I think of it, I am surprised that I did not hear this comparison being made by any of my grandparents. All four of them had seen both Partition (they had moved from Pakistan in 1947) and '84 riots.
None of them are here now. So can't ask the question.

This books touched many chords with me. I am from Delhi. I am a Sikh.

I was eager to read this book because of 1984. I was 7 years of age in 1984. I have vague memories of seeing burning buildings from the terrace of our house. I don't remember being worried. I can't even begin to imagine how terrified the grown-ups must have been.


For me personally, reading this book was a distressing experience. It took me a while to get my thoughts in order to write about it rationally.

As I was reading this novel, as the incidents of 31st October to 3rd November unfolded, I was restless for 4th November, because I knew the terror would end as 4th would dawn.
What was it like without knowing this? What was it like to live through it? I have asked these questions a lot recently.

Not that the discussions about 1984 are too rare. They do crop up off and on.
But after reading this book, the first question I asked family and friends, who were grown-ups back then, is a question I had never asked before. The one question that lingered in my mind after reading The Assassinations - A Novel of 1984 - "How do you stop being afraid?"
I felt restless and upset reading the '84 riots, even though I know things will return to 'normal'.

"What made people agree to forget and go on as before? For no matter how hard you tried, you couldn't forget."
A few Punjabi phrases used in the book don't find a translation anywhere in the book. Much as I loved them, I wonder how a non-Punjabi speaking reader would react to them.
You won't miss the anything about the story even if you don't understand them. And the fact is that no translation can give you the impact that the slang does, I guess is a good reason for leaving them untranslated.

Vikram Kapur's The Assassinations - A Novel of 1984 is a must-read, not just to know about 1984, not just to feel the emotions of living through the riots and the after-effects of it, but also because it is a story that could be true for any community, any place.
on March 08, 2018
Email ThisBlogThis!Share to TwitterShare to FacebookShare to Pinterest
Labels: Book Review