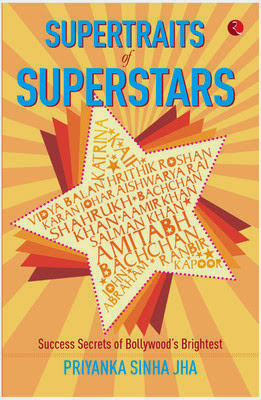 Priyanka Sinha Jha's Supertraits of Superstars is about 'Success Secrets of Bollywood's Brightest'. A self-help motivational book, using biographical anecdotes from the lives of some Bollywood Stars.

The book is not exactly biographical because it doesn't narrate life-stories of these actors. Rather a few incidents from their lives are used to highlight their 'supertraits'.

As the author says in the introduction to this book, reading Richard Bach's Illusions as a youngster was a life-changing moment for her. As a journalist, she interacted with Bollywood actors. She got inspired by them.

It takes an open and positive mind to be able to appreciate and soak up the goodness, to be able to make it a motivational factor for oneself.

The book starts with Amitabh Bachchan - a good start. His discipline, punctuality and humility is impressive, and the author illustrates them with impressive incidents.

"Success can be as difficult to process and assimilate as a failure and rejection"
The supertraits are about achieving success, but all these individuals have been successful for quite sometime now, and it is a supertrait in itself to be able to not let this success get to oneself and take it in one's stride.

Discipline, hardwork, humility, never-say-die attitude, focus and much more... and knowing that these stars live each day working harder, not taking their success for granted, is a great motivation.

One of the questions I was asking myself as I read this book was whether a reader who is not familiar with the world of Bollywood would enjoy this book.
I think, yes, but not half as much as a Bollywood fan would.

To clarify, I love my fair share of Hindi films and do browse through Bombay Times and HT City almost every day. In a Dentist's waiting room, I would usually reach for 'Filmfare' or 'Stardust'.
On the other hand, I don't read any of these cover to cover.
So, I am interested enough, but not a crazy fan.

Being the Editor of Screen, I am sure she knows tons about the private lives of these stars. Her integrity has to be appreciated as she doesn't resort to gossip - it would certainly have additional waves for the book.

A lot of incidents or habits she wrote of are already well-known. Aamir Khan, for instance, is referred to as perfectionist all the time. It is the way, these traits are explained that one can use this book as a positive motivational book.

There are a couple of instances where I felt that certain topic has been over-discussed, though.

The book is about admiration of these wonderful individuals.

The author uses clear expression, identifying the core strength of these actors, rather than vaguely telling stories about them.
It is like someone explaining a boring subject to you in an entertaining way, making it interesting.

I would have loved a few more anecdotes, some more stories I didn't know of.

In the author's words:
"While this book may or may not turn you into a Bollywood star, it can certainly make you a superstar in your own universe."

Some actors I wish had been included - Kajol, Anil Kapoor, Sushmita Sen (Don't call her a superstar, but write about her), Farhan Akhtar.


Can we look forward to a sequel?

Read it even if you don't usually read about Bollywood stars. The book is about hardworking individuals who are actors.

Inspirational Quotes from this book

About the author
Priyanka Sinha Jha is a journalist who, in her eighteen-year-long career, has written on celebrities, films, lifestyle, business and more. She has been a correspondent for publications as varied as Citadel, The Asian Age and Intelligent Investor. At the age of twenty-six, she became the editor of Society, India's first celebrity magazine, followed by a stint as editor of HT Style and HT Saturday. Currently, she is the editor of Screen, India's foremost film and entertainment weekly. She has also contributed to Outlook, The Week and Tehelka, and has a regular column in The Indian Express: Play.
on November 02, 2019
Email ThisBlogThis!Share to TwitterShare to FacebookShare to Pinterest
Labels: Book Review