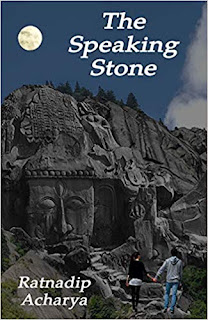 My Review of The Speaking Stone
The Speaking Stone narrates two different tales parallelly - one set in the present day and another in the 1900s.
Destiny leads the two central characters of The Speaking Stone, Saikat and Shuvashini to a destination which is unusual for them. In their effort to solve the mystery of a stone Saikat had come across, the two are lead down an adventurous, thrilling, and romantic path.
The story in the 1900s is again a story of mystique and romance and also, tragedy.

The author takes the reader from the present to the past and back again, and as readers, we discover subtle emotions that hold as true today as they did in the past.
There are parallels of almost every character from the story of the past to that in the present, but these similarities don't seem forced. Rather they enhance the emotional connect and the sense of anticipation that is felt while discovering these worlds.

The one disappointment I had with this book was the central female character, who started as a strong individual but soon enough lost the sheen of both strength and individuality. I just wish she had not ended up being the 'second lead' to the dynamic Saikat.

All in all, The Speaking Stone speaks volumes about the mystery that could be hidden in the many artifacts of India. I especially enjoyed the fact that this book is set in India, and takes us from the bylanes of Colaba to the hills of Tripura.

Ratnadip Acharya is the author of two successful novels, Life is Always Aimless... Unless
you love it and Paradise Lost & Regained. He is a columnist for the Speaking Tree in The
Times of India. He contributed many write-ups in different collections of Chicken Soup for
the Soul.