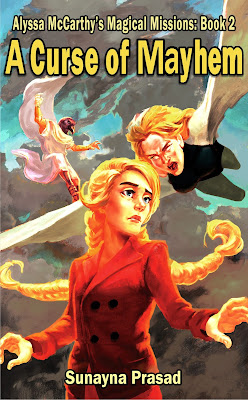 Book Title: A Curse of Mayhem (Alyssa McCarthy's Magical Missions, Book 2)
Author: Sunayna Prasad
Category: Middle-Grade Fiction (Ages 8-12),  173 pages
Genre: Fantasy
Publisher: Amazon KDP
Release date: July 2019
Content Rating: G: There is no mature language or adult content whatsoever.
My Review
Six months after her first encounter with magic, thirteen-year-old Alyssa encounters the world of magic again. The difference this time is that she herself can perform magic, something she needs to get rid of to live a normal life. Alyssa's home life has improved since the first book as she is now living with her godfather, Alex.
The enemy in this one is Errol, a wizard from ages ago, who is trying to find life again through Alyssa.
In A Curse of Mayhem, Alyssa struggles to find a balance between her life - home, school, grades, friends and the fight to escape another evil wizard. Talking about the evil wizard, the one from the first book does have a presence on this one too, which connects the two stories, but it can still be read as a standalone story.
Alyssa lives an otherwise 'normal' world where magic is not supposed to be true, and yet it is surprising how easily it is accepted by almost everyone to be an explanation for what is going on. A mildly damaging magic, though done inadvertently, just earns you detention with a warning to get rid of the magic soon. Why are the authorities not being called in? Why is no one questioning her sanity? Why is no one taking her to a doctor? On the other hand, it's a fantasy and is to be enjoyed in the right spirit.
A Curse of Mayhem takes the story of the Frights of Fiji and is an interesting read for the lovers of fantasy.
*  *  *
Book Description:

History, like magic, has a habit of repeating itself.

It’s been six months since thirteen-year-old Alyssa McCarthy left magic behind for good. Or so she thought…

Then the enchanted objects that protected her disappear. Now a skeleton named Errol has cursed her with magical powers that keep getting her in trouble. Suddenly strange things are happening with disastrous effects, and if Alyssa can’t remove the magic, she will lose everything she holds dear. In order to get rid of her unwanted wizardry, Alyssa will have to boost her bravery and confidence and determine who Errol really is. But every time Alyssa uses an enchantment, Errol is one step closer to getting his flesh back and becoming alive, and he will do anything to achieve his goals…even if it means destroying Alyssa’s happiness.

Originally published in 2016 as “Wizardry Goes Wild” and “The Unruly Curse” in 2019, “A Curse of Mayhem” is book two in the exciting and suspenseful “Magical Missions” series.

Sunayna Prasad enjoys writing fantasy books for children, as well as cooking, creating artwork, watching online videos, and blogging.
Sunayna has graduated from college in May 2017. She lives in Long Island, NY.